Successor Kingdoms
Of all the Noble Peoples, humans are the most numerous, found everywhere, from the most verdant valley to the harshest environment, anywhere a living can be scratched from the land.

Men are as likely to fight shoulder to shoulder with the elves and dwarfs as they are to oppose them, and on many occasions men have fought on both sides of the battle in these grand alliances. Men, however, most often fight other men, whether through greed or hatred or honour or just through misunderstanding. Humans are hot-blooded, and not always wise.

The Successor Kingdoms are the homes of engineers and wizard-scholars, and their armies often reflect this.

The venerable bow is the most common ranged weapons in human kingdoms, although some human rulers equip their troops with crossbows.

Shieldwall formations are still favoured by many human armies and civilisations through the ages. Warriors are equipped with chain mail or leather armour and carry a sword or axe and a wide shield that they can lock together to adopt a defensive barrier.

Human noblemen tend to equip the elite warriors making up their foot guard with the best armour and weaponry that their wealth can afford.

Many city states have a militia to varying degrees of professionalism and training. These conscripted soldiers are there to show strength in numbers, and are sacraficed so that the real soldiers can escape in an orderly fashion.

Humans have forever used horses as beasts of burden, tools of war, or simply creatures of leisure. Across all the human lands, units of cavalry may vary wildly in their appearance and training, but fundamentally any military scholar would categorise them in a similar way: heavy horse, light horse, and skirmishers.

Lightly armed compared with the knights, mounted sergeants are swift cavalry units used most often on the wings of a battle line to pursue and cut down enemies that are retreating from the battlefield.

Mounted scouts are deployed in skirmish or reconnaissance roles. They are fast and flexible warriors that form the eyes and ears of an army as it advances. 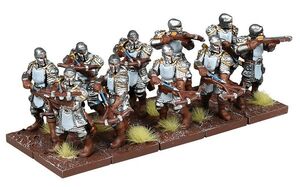 Chariots are one of the most devastating weapons deployed by the Kingdoms of Men, and only the finest warriors are permitted to use them. Training hard to acquire the expertise to handle the warhorses which draw them, as well as to gain the skill to make use of their weapons on the jolting, shifting platform, charioteer units are the pride of any army and the bane of many foes.

War engines of mankind have been adopted, borrowed or stolen from all over the world. From seige catapults to devices firing explosive shells or rockets. Balistas, Scorpions and other giant crossbows that fire large bolts to skewer enemy warriors.

Cannons still are the most cost effective war machines used by men.

The most successful hunters in the world are considered to be the humans, so much so that they are seen as a ravenous plague that strips the land of its resources, rather than a celebrated Noble Peoples. Tribal hunters hunt and capture huge creatures like the mammoths, Giants are harried allong by ranks of human pole-arms. Not all beasts live in servitude, notably the Goliaths of Keretia and the Cyclopean Swamp Lords of Khopacati offer their services for a fee.

From elf lords and princes, dwarf kings and Salamander clan lords, to snow troll primes, orc Krudgers and undead pharaohs, the great leaders of the world are often equally as fearsome in battle as they are in political scheming and the running of empires. Human nobles and generals, however, are not always the most powerful warriors, but they are the best battle-leaders.

Recognising that devolving the actual fighting to their champions and trusted heroes while they lend their intellect to logistics and strategy. When human generals do take to the field, only the richest noblemen can afford to ride a hippogryph, manticore, or similar winged beast.

Magic is regarded with superstition and fear, as well as a source of power. Humans learn magic quickly as they do not have the lifespan to master it over centuries, as such they are hot headed, impatient, quenching thirst for more. Many take dangerous risks to short cut the mastery, or head into necromancy. Competent and trustworthy wizards are rare and valued addition to the army.

Mankind has a fascination with sorcery. Magic is regarded with superstition and fear and is also a road to power and prestige. Human wizards must learn their trade quickly, for they do not have the centuries that the great.

The Kingdoms of Men Armada

The Kingdoms of Men navy vies for the top spot of the best human navy against Basileans.

Like all human warfleets, however, the Navy depends upon sail for its speed and manoeuvrability. Their sailors are expert in bringing vessels alongside the enemy, or even crossing their bows, so that the gunners might unleash several decks of thunderous broadsides.

The fleet relies heavily on the deployment of line-of-battle ships, laden with heavy cannon. These vessels are square-rigged sailing ships, with robust hulls.

Retrieved from "https://pannithor-kow.fandom.com/wiki/Kingdoms_of_Men?oldid=8897"
Community content is available under CC-BY-SA unless otherwise noted.