The genesis of the Herd is a sad tale from the God War.

As Dark Kyron tore apart the essences of many sentient beings and beasts, Garkan used these in his forge to create twisted creations. Once they perfected their creation of the Orcs, Dark Kyron had a play in the forge with the tossed aside elements, creating creatures on a whim and tossing them into the world without a thought or plan.

Part noble beings and part beasts, Brave Kyron took pity on these creatures and bent his will to aid them. The forge work could not be undone, but he could heal their souls and hearts as best he could, so the souls could see the possibilities of a better life than what was intended for them.

Not all could be helped, as they were too far gone, and instead listened to Dark Kyron who stoked the rage and pain within them, driving them towards Oskan to use as fodder.

The others who saw for the first time their place in the world, retreated into the depths of Galahir, where the Green Lady took pity on them.

The Herd declared her Mother and went on to worship and serve her and her realm.

Dark Kyron's jealousy was not tempered and whispering in the ears of men, turned them against the creatures of the Herd, seeing them as abominations against nature, no better than an orc.

So while the Green Lady was battling to rescue the men of Pannithor while the God War raged, the men attacked, shunned and reviled the Herd.

No matter what blessings the Green Lady laid on the Herd, the fears grew, this taint swept into the minds of the Dwarfs. The elves tolerated them, but the Herd was becoming a liability as the God War progressed. The armies of the lady distrusted them and this distrust sewed weakness into the ranks.

The Herd was ordered to remain within Galahir, to protect it and watch for marauding bands who would attempt to invade it. The Herd saw the order for what it was, but as a proud race cared little for the thoughts of man, instead took the guardianship of the borders as their sacred duty.

In this duty they carry on today in Galahir and beyond, the Herd are set apart from the other allies of the Mother.

The Herd are a kindred, joined by shared experience and cultural memories, they know exactly where they came from, the purpose they were created for, and their role they were then shaped to, they are content. They observe the skies, patiently watching the unending dance in the heavens as Brave Kyron endlessly pursues his evil twin.

They are at one with their environment, that to outsiders looks superstitious and savage. They are peaceful farmers, hunters and carers, until they are required to fight. Given a choice, however, they would rather live at peace with everything around them.

In times of peace, those known as the Guardians are typically solitary, territorial, and reclusive individuals. Each innately knows the land they are tasked to protect. When the threat is great, or when the Herd must gather to march to war, all manner of these powerful beastmen will band together.

They are often equipped with brutal weaponry and huge wooden shields. Others may have armoured hides, razor-sharp claws, and powerful beaks which they use to rend their enemies.

In battle, they are a disparate but highly capable force, deploying a very unique and varied array of troops into battle, from tribal warriors of fauns and satyrs, tribal beastmen, to troops of owlbears, minotaurs, hulking lycans, brutal centaurs and flying harpies and centaurs, and even the very trees and creatures of the land themselves—summoned and infused with the magic of the Lady’s druids. They use their diverseness to their deadly advantage, 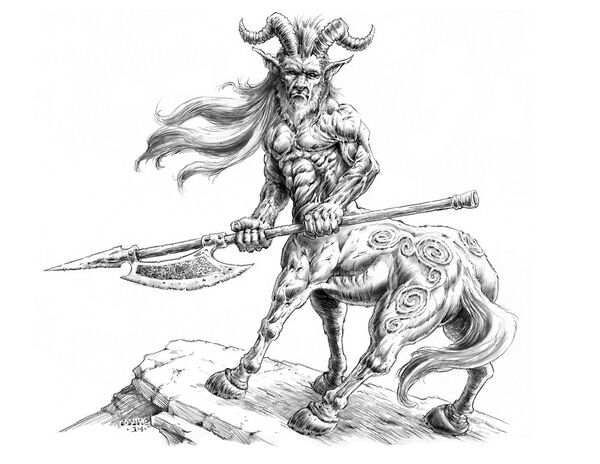 The lifeblood and spirit of Brave Kyron throbs through the veins of the Herd.

The Herd knows all too well how the humble spear can destroy the momentum of an assault and use it themselves in defence and counter-attack.

The Herd are an immensely valuable tool in the arsenal of the Green Lady and for her constant struggle to find balance in the world.

Orcs and other evil things have a special hatred reserved for them, and the Herd must fight to protect the Mother-world from predation and plunder from all quarters.

Longhorns, the biggest and bulkiest of the frontline infantry. With the Druids blessings, these beastmen lead the herd into battle.

Tribal Spirit Walkers, caring no longer for their own lives but only that of the meaning of nature, they will willingly sacrifice themselves in battle for the Herd.

The muscle-bound and ferocious beastmen that tower above even the Longhorns, Support the the tribal warriors.

Lycans are those that Kyron rescued after Garkan’s experiments in merging man and wolf. The Werewolves, lost to darkness, become perverse and twisted things. the Lycans are fast and powerful beings, and their feral-looking eyes glitter with a surprising intellect.

Guardian Brutes are not easily given to fear or defeat, smashing their way into the fray. This is demonstrated by the thunderous and devastating charges of the Minotaur Chariots.

The tribal Druids, or shaman, share the deepest connection to both the Mother and the Father and advise the great chieftains on all matters.

Were they more aggressive, or less tied to their duty, the Herd might be a force that would overwhelm the world very rapidly. It is shameful that Brave Kyron is barely remembered outside of their own kin, as he surely saved the world in more ways than one the day he saved the Herd.

Retrieved from "https://pannithor-kow.fandom.com/wiki/The_Herd?oldid=5500"
Community content is available under CC-BY-SA unless otherwise noted.